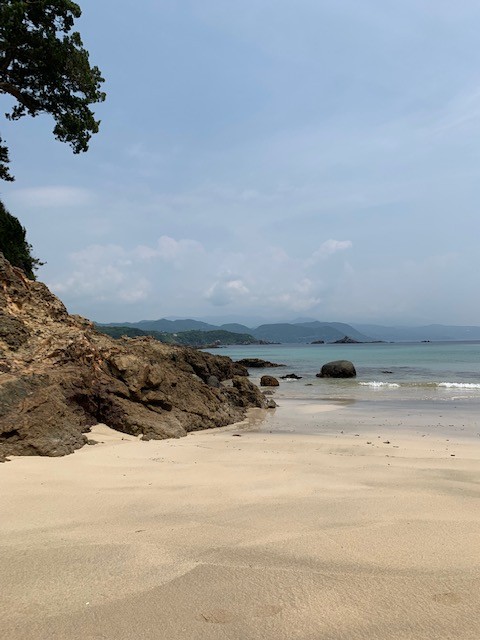 You don’t need to go all the way to Okinawa if you want to go to a white sandy beach with azure blue waters. Volcanic peninsula Izu has its fair share of wonderful beaches, of which Shimoda has the most beautiful one according to most people. It is hard to believe that this subtropical paradise is only 2 hours away by train from Tokyo station.

The number one attraction of Shimoda is, of course, its whitest beach Shirahama beach. It is crowded during Japan’s beach season which only lasts from early July until late August, but in the off-peak season when it is already warm but not in season yet, it is wonderfully quiet with only a few people enjoying the crystal clear refreshing seawater. It is possible to bodyboard and surf here although the waves are not the highest, and snorkeling is also an option. Please note that during the off-season you have to bring your own gear. In July and August, there are shops nearby that rent boards and snorkeling gear. There are other good beaches in the area as well, such as Tatadohama beach, Sotoura beach, and Kisami Ohama beach.

Off the shore, you can enjoy the views of Shimoda as well from a boat, a kayak, or while doing SUP. The Nesugatayama Cable Car service, available from the Shimoda Station, takes you to the peak of Mt. Nesugatayama.

Shimoda also has historical importance as the landing place of several of Commodore Perry’s ‘black ships’ in 1854, an event which marked the end of Japan’s era of isolation and the start of diplomatic relations between the US and Japan. There is a Matthew Perry monument near Shimoda Marine Park with Perry’s statue to commemorate this big event. Perry Road is a scenic district that used to be a red light area. Now you can enjoy cute little cafes and restaurants in the area.

If you come to Shimoda with kids, the Shimoda Aquarium is a nice stop. What’s special about this aquarium is that there are many animals that you can really get close to or even touch, under the supervision of the staff.

Cape Irozaki, at the southern tip further down the Izu Peninsula half an hour away from Shimoda, is a scenic spot with its lighthouse and towering cliffs, a view of which you can enjoy from aboard a boat that tours around the cape. You can also enjoy its tropical atmosphere at a huge tropical botanical garden near the station. Not too far from Cape Irozaki is Hirizo Beach, one of the best spots to snorkel on the Izu Peninsula.

Kawazu is only a small town, and it is a good spot to include in your itinerary if you wan...
">

Atami is a popular destination for cherry blossom viewing in spring and fireworks and the ...
">

Odawara City is situated in the southwest of Kanagawa Prefecture, 40 minutes away from Tok...