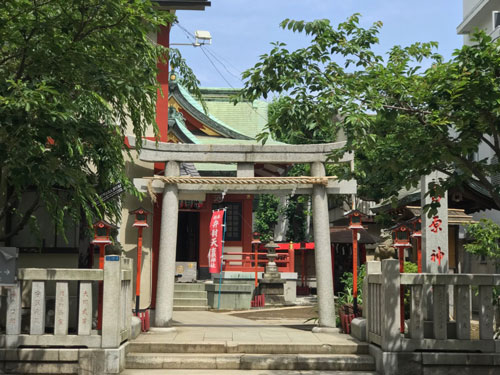 In the traditional area of ​​Asakusa in Tokyo, about 20 minutes walk from the famous Sensoji temple, you can reach the Yoshiwara Shrine. This small but beautiful sanctuary is one of the few things left from the past that characterized this section of Tokyo.

The Yoshiwara district was the red light district of ​​the city of Edo during the Edo Period (1603-1868). This is where high-class courtesans named oiran were housed, and all were treated equally here, from peasants to samurai. It was mandatory to leave your weapons at the entrance of Yoshiwara before passing. This area was home to more than 9,000 women from all over Japan. The most anticipated event by the visitors of Yoshiwara was the elegant and magnificent procession of the oiran. At this time, the oiran was the biggest superstar of the place, and it was very common for her to be revered.

When the Meiji era arrived in 1868, the district gradually lost power due to new regulations, and because in 1913 there was a large fire that destroyed almost the entire district. Again with the great Tokyo earthquake in 1923, much of the sector burned down resulting in the death of many workers. Finally, after the Yoshiwara Shrine was rebuilt and the city was returned to its previous state, in the great bombing of Tokyo in 1945 carried out by the US Army the shrine and Yoshiwara were burned and destroyed completely again.

After the Second World War, the new constitution imposed by the United States began to take effect and Yoshiwara was rebuilt as a normal neighborhood. Today, Yoshiwara corresponds to the Taito district in the city of Tokyo. At first glance, Yoshiwara today looks similar to many other modern Tokyo neighborhoods. It, however, retains legacies of its past like the grid pattern of the streets, and the temples and shrines of past times still exist.

Fortunately, Yoshiwara Shrine was rebuilt in 1968. It is divided into two parts, and the first is the place where people pray and obtain the 0mamori (protection charms) of the sanctuary. The second part is about 4 minutes walking from the main sanctuary and is a garden with a small pond with koi fish and a great image of the goddess Benzaiten drawn on the wall. There is also a statue of Kannon, the Buddhist goddess of mercy, remembering all the people who died in Yoshiwara during the Tokyo earthquake.

This place today is blessed by goddess Benzaiten. She is the goddess of the arts, prosperity, and abundance, and is protective of women and artists. Yoshiwara Shrine is dedicated to her and is one of the few reminders of what the district was like in the past.

The oldest temple in the city of Tokyo and the most visited spiritual place in the world w...