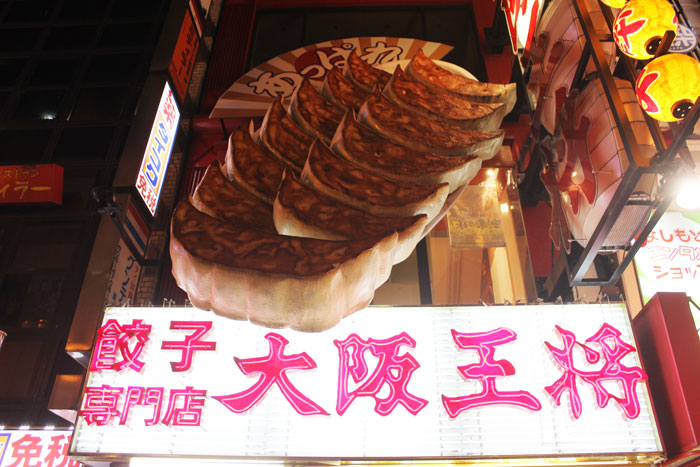 To help you decide where to go in Osaka if you are short on time, we compiled a list of the 5 best places to visit in this bustling city. 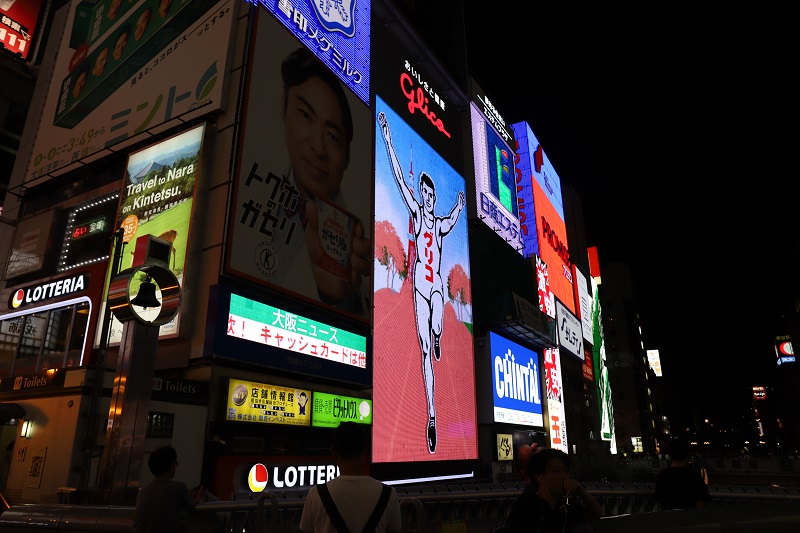 The lively Dotonbori entertainment area is Osaka’s most famous tourist destination for its striking neon lights, extravagant signage, and its huge variety of restaurants and bars. Dotonbori is famous for the eye-catching posters and billboards with a giant blowfish, an octopus, a clown, and the Kani Douraku crab competing for your attention and creating an atmosphere comparable to that of an amusement park. However, of all these signs, the most iconic one is the sign of the Glico running man over the Ebisubashi Bridge. 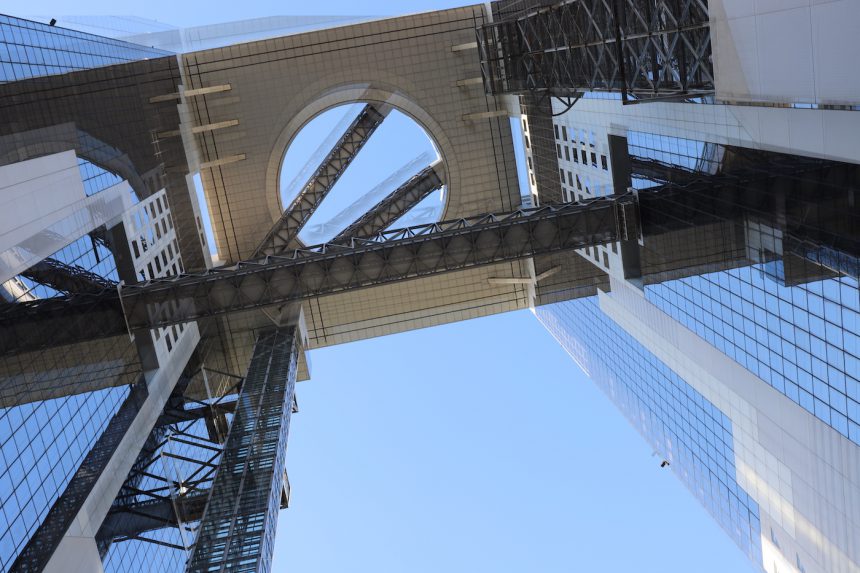 Osaka is recognized, along with Tokyo, as one of the most modern cities in the world. As one of the best examples of artistic beauty with state-of-the-art technology, there is the Umeda Sky Building tower, only a short distance from Osaka Station. The building consists of two equal 40-story towers connected at the top by bridges and a moving staircase across the wide central atrium. The building is crowned by a platform measuring 54 by 54 meters, pierced at its center by a glass ring. The observatory has two floors. One is completely inside the building. It has works of art, restaurants, and a nice environment for recreation. The second floor is totally outdoors and offers a 360-degree view of the entire city. 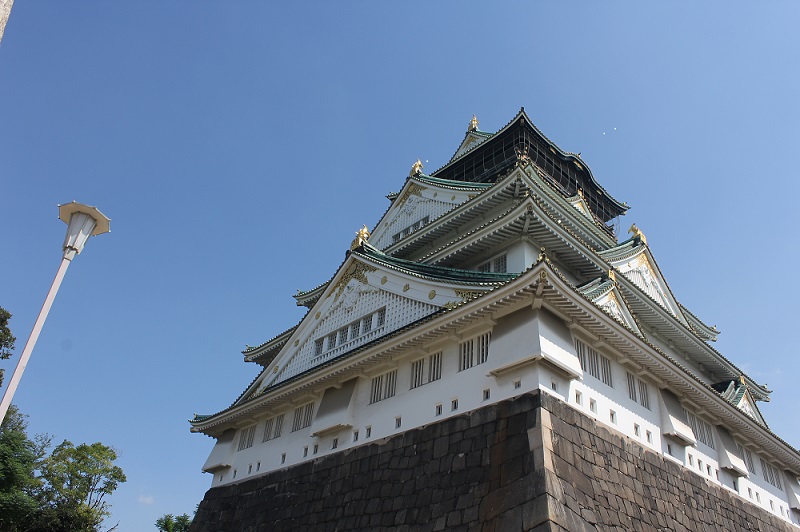 The history of Osaka Castle goes back over 400 years. Civil war continued from the mid-15th century in Japan, and it was Commander Hideyoshi Toyotomi who completed the country’s military unification. The castle was created as his base. Its beautiful design gives it the status of one of Japan’s three main castles. The area around the castle tower has developed into a park, and the plums and cherry blossoms in spring and the red leaves in autumn offer magnificent views. For those visiting the Kansai region of Japan for the first time, Osaka Castle is an absolute must-see. It is a perfect half-day trip where you can both appreciate the serene nature in the many beautiful tree-filled areas and be amazed at Osaka’s rich and intriguing history. 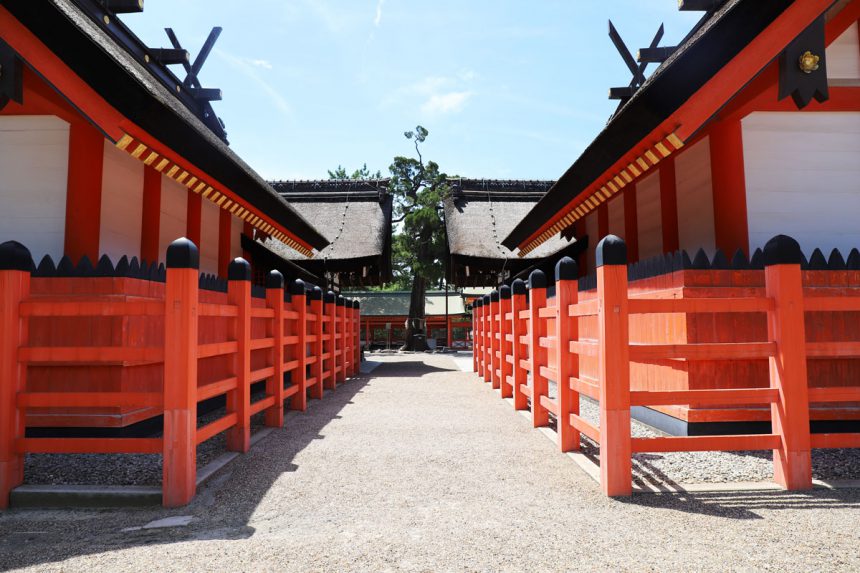 The Sumiyoshi Taisha Shinto shrine was founded in 211 and is one of the oldest shrines in Japan. It is dedicated to the Sumiyoshi Sanjin, a trio of sea gods, who protect the country, provide safety in sea travel and inspiration for poets. It is also dedicated to Empress Jingu, who returned safely from a trip from Korea, and later was told by an oracle of the great goddess Amaterasu that she should build a sacred enclosure in honor of the Sumiyoshi Sanjin. After some time, Empress Jingu was also consecrated at this site. Sumiyoshi Taisha is the principal of a network of more than 2,000 Sumiyoshi shrines scattered throughout the country. This is why, until 1945, it was in the first rank of government-funded shrines. It is the most beautiful and important in Osaka, and certainly one of the most beautiful in the whole country. 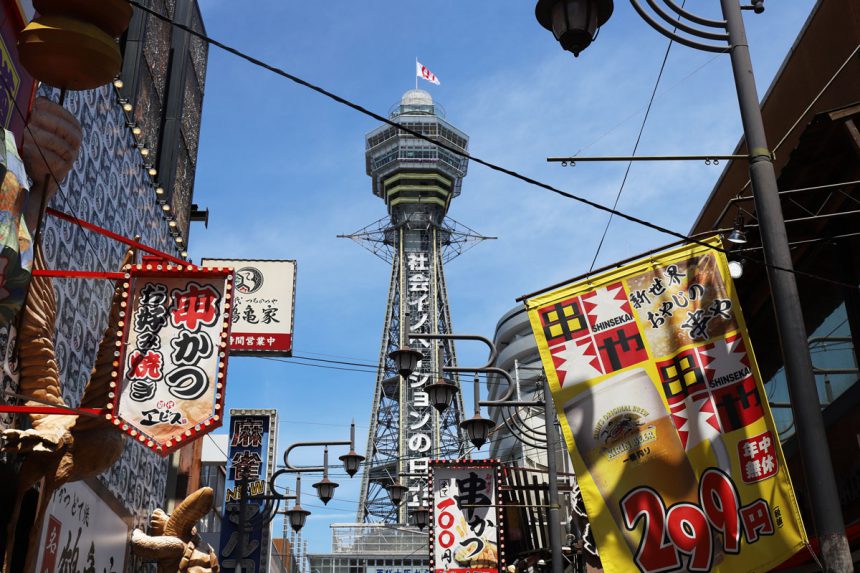 Shinsekai literally means ‘new world’ in Japanese. Retro-futuristic in appearance with plenty of neon lights and 3D signs, Shinsekai’s creation dates back to 1903 when Osaka City hosted the National Industrial Exhibition. After that, Shinsekai was designed as a neighborhood where all kinds of attractions, bars, and restaurants were located.

The Tsutenkaku Tower with its 108 m height is one of the icons of Osaka and is the central point of the Shinsekai area. There are 7 different floors in the building. On the upper floors, the tower has 2 viewpoints that offer a spectacular view of the surroundings and an open-air garden. There are also restaurants and souvenir shops. One of the biggest attractions of the Tsutenkakuo Tower is its lighting even though it can only be enjoyed at night, the tower’s LED lights vary in color as the seasons change.

There are many more tourist attractions in Osaka, but you have little time to visit the city this list will make it a little easier for you to make the most of your time here.

If you are thinking about making a trip to Japan, as seasoned Japan experts we can help you create your perfect Japan tour, including destinations like Osaka. Contact us to start planning your unforgettable holiday to this fascinating country full of once-in-a-lifetime experiences, culture, history, nature, and delicious food!

5 Most Recommended Places in Tokyo

While planning a trip to Japan, it can be difficult to make a choice of where to go, due t...
">